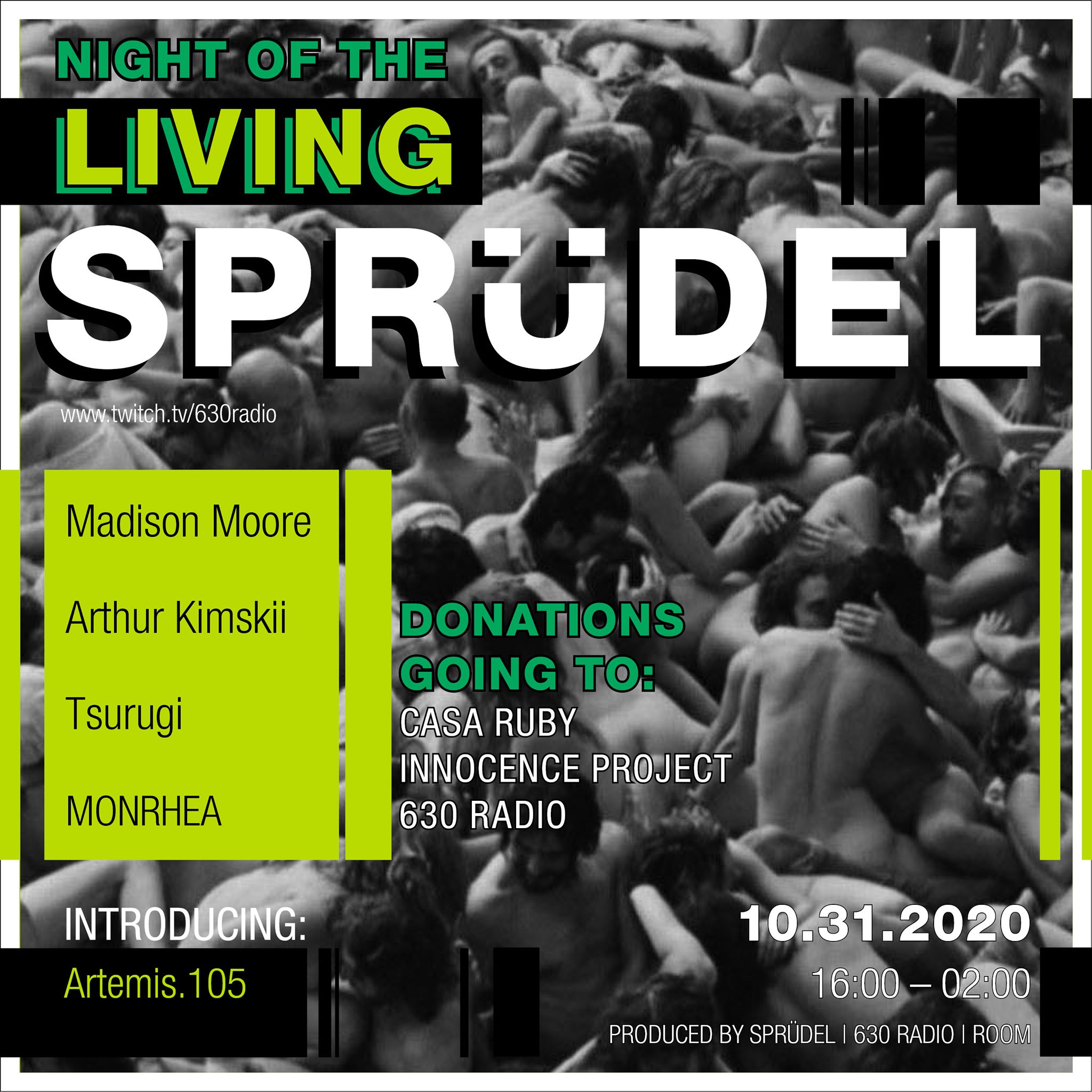 Live from D.C. “Night OF the Living Sprüdel”

It is known in some circles that when a good thing dies, it does not stay dead for long. After much thought and planning, we at SPRÜDEL have decided to resurrect a gone too soon party series for a single night of morbid virtual hedonism. We are proud to present NIGHT OF THE LIVING SPRÜDEL, a stream event for your undead pleasure. Starring a diverse cast of the DMV’s weirdest and wildest DJs including hard and heavy party controller Madison Moore as The Professor, Sprüdel creator and founder Arthur Kimskii as Aunty Ranty, the cyclonic savant Tsurugi as The Swordsman, down and dirty bass from MONRHEA as Ambassador M, and introducing the debut of Sprüdel hype-boy Artemis.105 as New Boy.
Madison Moore
Opulence, RVA
https://soundcloud.com/madison-alexander-moore
Born and raised in Ferguson, Missouri, madison moore is a polymath: a professor of gender studies, author of a New York Times celebrated book on fabulousness, and a burgeoning artist on the global queer techno scene. His sassy, energetic sets are known for bringing the flavors of hard techno, house, ghetto tech, vogue beats, disco and dub techno to the dance floor. After moving to London in 2014, madison quickly became a regular on the London scene and co-founded OPULENCE, a queer techno collective that was featured in Last Dance, a short film about London nightlife released by 4:3/Boiler Room. Since 2014, madison has played clubs in London, Amsterdam, Berlin, Bristol, New York, and has shared the decks with the likes of Boris, Machine Woman, Samuel Kerridge, SPFDJ, Roy Perez and Object Blue.
Arthur Kimskii
Sprüdel, Monday Off, L.A.G, DC
https://soundcloud.com/kimskii
Arthur Kimskii has been involved with electronic music for nearly two decades. Between Washington DC, New York, and Berlin, Kimskii has managed to clock up quite a bit of notoriety. He enjoyed success in curating events in New York, which turned into production and label management before moving to Berlin. Having enjoyed several successful years curating events in New York, Kimskii turned to production and label management before moving to Berlin. Kimskii channels those international experiences into his production and his label L.A.G.’s aesthetic, which was have been charted by Radio Slave, Jamaica Suk, Stephanie Sykes, Alienata, among others. As a producer he’s released music on Monday Off, Dusk & Haze, Mysteries of the Deep, Metro Xpress, On Board, and Gradient Sound.
Tsurugi
DC
https://soundcloud.com/tsurugi
Tsurugi is a DJ currently based in the US. A long time music enthusiast having traveled around the globe chasing new journeys through forward thinking sounds in techno and cutting-edge electronics. Having help cultivate events in the past he continues to keep his finger on the pulse of reinvented/deconstructed sounds.
MONRHEA
BYTE/ DC
https://soundcloud.com/monrheacarter
[MONRHEA] is a Producer and DJ, brewing in the underground music scene in Nairobi and beyond. Her music has been featured on Resident Advisor and on radio shows such as Rinse FM (UK/FR) and Reform Radio (UK). She has graced the stages of underground clubs in the home city such as TEMPLE and MUZE and also major electronic music festivals in East Africa: Kilifi New Year (KE) and Nyege Nyege (UG). Currently, in the US, she’s partnered with DC’s SOFTIE____ to create a platform which aims to spread the world of music coding called BYTE
Artemis.105
Sprüdel, DC
https://soundcloud.com/artemis105
Artemis.105 is so underground, you haven’t even heard of him yet. As a DJ and Event Producer based in Washington DC, he draws sonic inspiration from Kafka, Miss Piggy, David Wojnarowicz, Marshstepper, Isherwood, Divine, Gaspar Noe, Mykki Blanco, Kierkegaard, Buffalo Bill, Denise Rabe, and that one scene in Gone Girl where Rosamund Pike kills Neil Patrick Harris. Combining all these tastes and genres together, his sets provoke a bodily reaction to think, to feel, and to dance. As Sprüdel hype-boy he could not be more thrilled to make his debut on this platform.
Donations:
This party will be very special because we are using this opportunity to raise funds for three very special organizations near and dear to our hearts. The donations will be split evenly between Casa Ruby, Innocence Project, and 630 Radio.
Here is some brief info about each organization:
Casa Ruby
Casa Ruby’s mission is to create success life stories among transgender, genderqueer, gender non-conforming, gay, lesbian and bisexual individuals. Their vision is to create a world where transgender, genderqueer, and gender non-conforming people pursue their dreams and achieve success in their lives without fear of discrimination, harassment, or violence due to their sexual orientation and or gender identity/gender expression.
Innocence Project
The Mid-Atlantic Innocence Project works to prevent and correct the conviction of innocent people in D.C., Maryland, and Virginia. We have one of the highest success rates in the country for exonerating those who have been wrongfully accused. The people who come to MAIP for help have nowhere else to turn. Many have been convicted of terrible crimes and are despised and ignored by society despite their innocence. Often, they have never had competent legal representation. MAIP gives hope to people who feel that they are out of options.
630 Radio
Our near and dear friends running an Internet Radio Station from Washington D.C. The station directly supports the space and our crews put out of work by the Covid19 crisis.
See you soon,
SPRÜDEL